Each year Sydney University Wind Orchestra tours to various schools around the greater Sydney region. This is a valuable chance for us to inspire hundreds of primary school age children by providing free, interactive concerts. This year’s program saw students go dancing with SUWO. Over three days the band travelled to five primary schools from as far south as Campbelltown to schools in the city presenting a fun program of diverse dances from around the world.

Day one saw the band venture south to Campbelltown where we performed for students at John Warby Public school and Campbelltown North Public School. Students and teachers alike were left waiting in keen anticipation as we began our set. But as soon as the first distinctive tritone was played the kids recognised the theme from the Simpsons and listened with excitement. 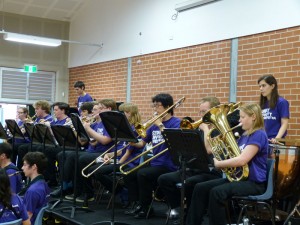 Many dances followed, from countries a far abroad as Armenia (often accompanied by a poor Russian accent/Dracula impersonation courtesy of “Conductor Steve”) The United States and the Latin Americas. Soul Bossanova saw the several students helping Steven dance with the band all the way to Latin America while The Mambo from West Side Story had them helping the band by shouting “MAMBO!” but not “Maaaaaaaambooooooooo!”

On Tuesday the band performed for the After School Care students at Annandale Public School where we had the special honour of inviting three students to play flute with us! 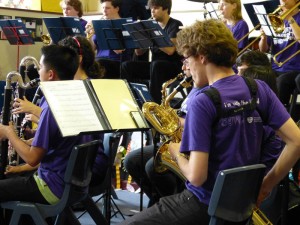 Lower Winds supporting the band from below 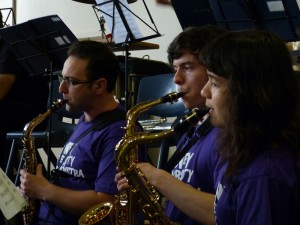 The sax section had a surprise addition

Day three saw the band perform for Darlington Public School and Glebe Public school. Audience participation is an important way to inspire students and get them truly involved in the experience. For this reason throughout the series we invited several students to come to the front and play percussion in the lively Spanish El Camino Real. Finally, after all of the sections in the orchestra had been featured it was time to teach the students about the most important person of all. The Conductor! A lucky student was invited to take up the baton and lead the band through the finale while the students shouted the dance’s name, Go Go!, in Armenian “Gna Gna!”

School concerts are a very important and rewarding event in SUWO’s concert program. It is especially exciting to be able to take the band to schools such as those in Campbelltown who do not have exposure to symphonic band music, let alone a music program. We’d like to thank all of the schools involved for allowing us to come and play for them. We hope they had as much fun as we had performing for them. Thanks also goes to our musical director Steven Capaldo for his work programming an interactive and entertaining concert and educating the students throughout the concert.